Anything else on your mind that you would like to discuss with other like-minded people.

When I was fat, the only people to fat shame me were some members of my family. At the time I accepted it as simply their misguided concerns for my health. Now that I am thin (thinner then almost all of them now), they actually thin shame me. I also find a lot of thin shaming in society in general. I get called "health nut" or "extreme" rather often. Has anyone else experienced this? Has society become so unhealthy that to strive for health is becoming taboo?
Top

Check out the article I posted called bigorexia. There is a complex in society for men to want to be huge as of recent years. Body shaming sucks either way. Often its due to people being insecure about themselves.
Top

Cappy wrote:I also find a lot of thin shaming in society in general. I get called "health nut" or "extreme" rather often. Has anyone else experienced this?

I think it's jealousy. Plus you're reminding other people of that plans they had to get more fit, eat healthier etc. but never followed through.

I experienced some kind of that but I have to say that IMO it's by far not as bad as the fat shaming and IMO there is a lot more of fat shaming (I won't even mention discrimination) going on in the world than thin shaming.

You could also say there is "vegan shaming" going on because I was called extreme and a health nut because of the way I eat quite a lot regardless of weight.
Top

There is a growing problem (usually seen on places like Tumblr) of thin shaming and fat acceptance.

mythil wrote:There is a growing problem (usually seen on places like Tumblr) of thin shaming and fat acceptance.

Crazy world with stupid people in it today.

I hear ya.
Top

It's something that gets me very angry. To the "fat acceptance" movement, anyone who is naturally slim OR has worked for their body (be it muscular, slim or so on) is oppressing them and is unfairly privileged over them. Just look up "fat acceptance" or "thin privilege"

To them, being obese is healthy and they think the world should accept that. The amount of amazing, over the top lies they tell themselves is insane. They will sometimes put pictures of themselves, usually obese but doing basic yoga moves.. Congratulations, just because you can get into a yoga pose doesn't mean that your body isn't swimming in fat. 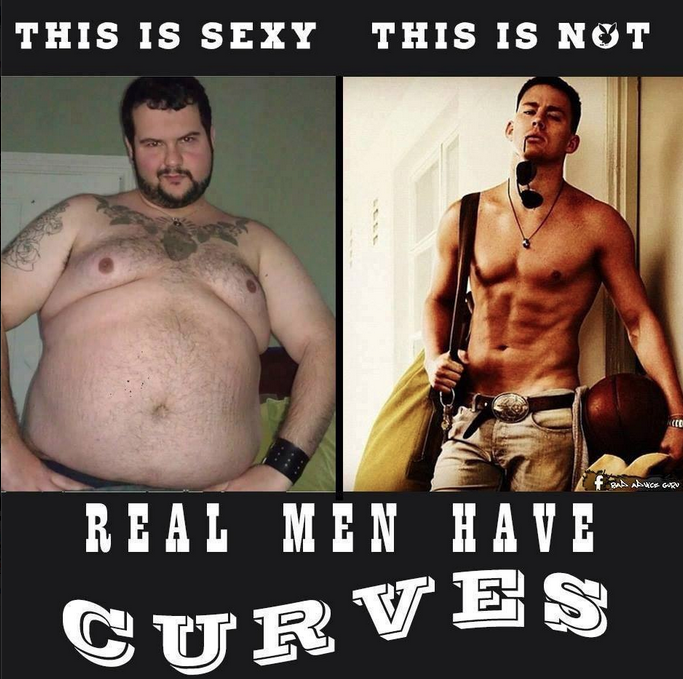 I've seen and experienced the harm the consumption of meat, especially fowl, can do to the brain. Histamine and tryptophan in high amounts without exercise keep the brain in a state of delusion pleasure without ever maturing.

Is it still their fault if they aren't self-aware of their own behavior?

In severe cases involving psychosis, the dominant symptom is usually delusional thinking rather than hallucinations.

Even in milder cases, delusion can still play a key role – the affected individual experiencing a surreal world of grandiosity and delusion without a clue that what they are experiencing has little bearing on the reality of a situation. The tendency is more often seen by observers rather than by the individual themselves. Histadelics tend to speak very little & may sit motionless for extended periods. They may appear outwardly calm, but suffer from extreme internal anxiety.
http://www.totalhealthclinic.co/index.php?option=com_content&view=article&id=54%3Ahistamine-and-the-brain&catid=6%3Aantioxidant-scan&Itemid=53

The very premise of "vegan bodybuilding" is to completely debunk the stereotypes of a lot of well meaning but misguided vegans who are naive about nutrition who truly are malnourished. Balanced diet, complete nutrition diet for whatever body diet is the goal. People still worship brute force size and violence so much so that a fair number of shameless meat eating idiots will always play on the malnourished weak vegan stereotype. It's true there are minimalist people who choose to be minimalist but carry on whatever activity they do that isn't particularly athletically muscualar, but as healthy as they can be, while still being thin often as endurance athletes. Whatever floats the boat, but I love seeing the stereotypes of the malnourished vegan crushed and love this site and the people who prove the stereotypes wrong. The vegan athletes who push high carb/ low fat and low protein diets on everyone, who are also vegans, are the ones who perpetuate the bad stereotype of a malnourished vegan more than anyone I've ever met, and do more harm than good to ending animal cruelty.

In retrospect I've met more than a fair share of fat bastards who live to repulse people with their junk food addiction and are really a bunch of parasitical sad diseased souls who are victims of the American obesity epidemic.

That blog is pretty interesting.
Top

thin shaming?
i guess there's 2 reasons someone might do it
1: jealousy/self consciousness
2: alpha male muscle head judging you for being thin

i don't know
honestly, i probably quietly judge fat/unhealthy people, i'm mostly good at keeping my tongue, if i do say anything about it, i'll usually try not to do it in a negative/ meaningless way, but really, any comments about physique & health can be taken badly

i really can't see a reason to "shame" thin people, the only time anyone should have any problem is when they have annorexia, or bolemia, or something damaging, but i doubt shaming them for that would help anything

as for being called a health nut etc, i've been called that on occasion, because of the whole non-animal diet, not drinking coffee, and not much black tea, drinking green tea, eating oats frequently, cooking lentils/ stir fried and stuff regularly or whatever , i've never been called a health nut or anything similar in derogatory way, or perhaps i just never take it that way, usually if people probe about it, i think i'm fairly direct and confident about the subject, never zealous, or push my values onto other people (if you do that, you'll probably get some shaming), i mostly keep my eating habits to myself unless i'ts brought up in a conversation.
Top

It is a strange conversation piece. Like the weather, everyone seems to have an opinion and wants to discuss bodies. Ugly bodies, hot bodies, fat bodies, thin bodies. It sounds easy to say simply to ignore it, but it does hurt every single time someone says something negative about your body. I guess some good consolation, is that you can be sure someone else is going through the same body teasing as you somewhere around the world.
Top

muchidna wrote: i think i'm fairly direct and confident about the subject, never zealous, or push my values onto other people (if you do that, you'll probably get some shaming), i mostly keep my eating habits to myself unless i'ts brought up in a conversation.

mythil wrote:There is a growing problem (usually seen on places like Tumblr) of thin shaming and fat acceptance.

Crazy world with stupid people in it today.

Agree 100%. It's got to the stage now where you can't even politely suggest that just maybe it's not optimal for someone's health to be 100lb overweight without someone accusing you of being a privileged fascist. Apparently the laws of medicine and thermodynamics don't apply to them.

I've particularly noticed this attitude gaining popularity within the vegan community. It seems that some vegans almost take a sense a pride from the fact they manage to be fat whilst consuming only plant-based foods. I remember when I first went vegan nearly 20 years ago the vegan stereotype was skinny hippies; it seems now to have changed to tubby cakemonsters.

People are free to make their own choices & to each their own, but they should be aware that being overtly over/underweight makes them a terrible advert for veganism.
Top

i think you'll find that people on tumblr/wherever become vegan for no health reasons, or to become responsible about their diet
or maybe they think it's some sort of miracle diet, lose weight, improve health just from becoming a vegan

too bad bout them carbs though
Top
Post Reply
18 posts

Users browsing this forum: No registered users and 2 guests